Get to Know: Tony Marquez 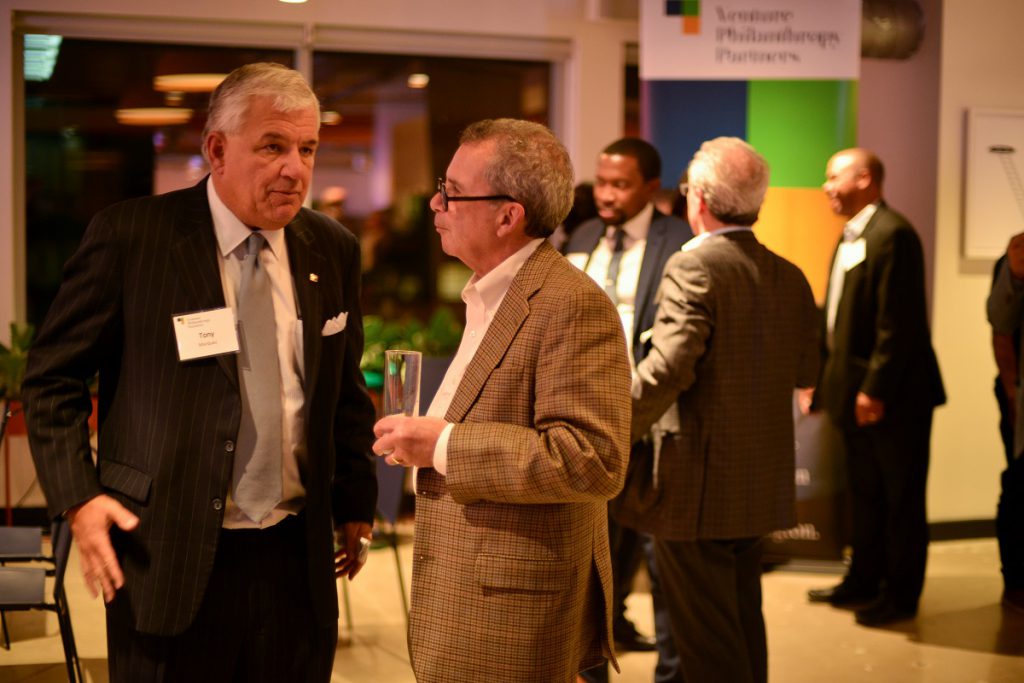 VPP Board Member Antonio Marquez is Executive Vice President – Chief Real Estate Lending Officer at EagleBank and has over 25 years of experience in the banking industry in the region. We spoke with Tony to learn more about him and how his upbringing and career interconnect with his engagement in philanthropy.

What were some of the early influences for you that made you the person that you are today?
I was born in Cuba but came to the US when I was very young. In 1962 my family left Cuba and moved to Colombia for a few years. I was in third grade when we moved to the US in 1967.

When we were leaving Cuba, my younger brother was too young for a passport and, as family folklore has it, my dad had to trade his Czech 45 pistol to get a passport for my brother. My story is the classic story of a child of parents who strive so that their kids can have a better life. One of the things that I give a lot of credit to my parents for is that they never dwelled on looking back; their attitude was, “We’re here now; move forward. Become Americans.” They never showed anxiety about the big changes in our lives or starting out here as immigrants – they always said, “We’re way better off here than anywhere else in the world,” and I believe that.

I grew up Philadelphia and in Puerto Rico and came to D.C. for college at GW (The George Washington University) with every intention of entering the foreign service after school, thinking that that would be the best way for me to serve and give back to our new home. But, as life sometimes goes, although I passed the written test for the Foreign Service, I couldn’t get on the rolls and so I ended up going into banking instead.

Immediately after college, I taught – and coached basketball and baseball – at Maret School (an independent college-preparatory day school) for a year, and then I went up to New York for a banking job.

How did you first get involved in philanthropy?
I’ve always seen giving back to the community a natural extension of my career in banking. When I was in New York I was on a few nonprofit boards, including the Long Island Hispanic Chamber of Commerce.

Ultimately, I think that most people come to the realization at some point in their lives that you get way more than you put in from any involvement with a nonprofit, charity or philanthropy.

When did you move back to the Greater Washington region and how did you first enter the philanthropy scene here?
My wife and I were starting to think about starting a family, and in New York there are too many evenings when you end up eating takeout at 10pm on a Wednesday… we realized that that the New York lifestyle was not going to work for us anymore. So, when my wife got a great job offer in DC, I was able to secure a job as well and we moved here. I worked at the venerable Riggs Bank.

During the day, my job involved working out loans with developers – at night, I figured I had to do something that did some good. So, I joined the National Park Trust and the National Park Conservation Association (NPCA) boards, both of which I was involved for a number of years.

You were on the board of VPP nonprofit partner Latin American Youth Center for many years and then joined VPP’s board two years ago. How did you first get introduced to both organizations?
Fred Bollerer, President and CEO of Riggs when I worked there (he was later a Partner at VPP), introduced me to both VPP and LAYC. I reached out to him when my tenure at the National Park Trust and NPCA boards ended and said, “Hey, I’m looking for another nonprofit to get engaged with.” He said, “Oh, do I have the organization for you!” The next thing I knew, I was VPP’s appointed board member for the Latin American Youth Center (LAYC).

My heritage was a natural connection to the organization, so it worked out perfectly. I ended up being the board chair of LAYC for more than 10 years. That relationship led me to join VPP’s board two years ago because, as I got more and more involved with LAYC, I grew to understand the importance of VPP’s role better and better and wanted to be part of its mission and work.

I read that your dad left school after 8th grade – did that influence your engagement with philanthropy and service as they relate to VPP’s focus on children and youth?
The importance of education was instilled in me and my siblings from a very young age. Sometimes when immigrants come to this country, they see education as the way for their children to succeed. Education was something my dad especially valued. The concept of going to college wasn’t even an expectation that my parents had to talk about – it was embedded into us. My dad always wondered why I never got a college ring after graduating – he saw that ring as a symbol of success.  His lack of education at the high school or college level was a gap in his background and when he was in meetings with engineers and others at work he felt it, but certainly over came it in many other ways. He was as smart as a whip, but always felt the gap and he never understood why having that symbol of education wasn’t important to me. That’s part of the reason why I connected so strongly to the young people served at LAYC when I was on the board there – in those young people, I saw the face of my dad, so it was a really natural connection for me.

How does your work at Eagle Bank connect to your engagement in philanthropy? What are some lessons learned that you have applied to your work with nonprofits?
Giving back to the community you belong to is an intrinsic aspect of any community bank.

EagleBank, for example, could not be happier to have been selected as the lender for the new Whitman-Walker Liz Center. As a community bank, this is the type of engagement that we think is a winner on all fronts – it’s good business for the bank, and it’s good for the community. It’s part of the ethic of the place where I work, and it has been since we were founded. All community banks generally think that way. I have tried to encourage all of our lenders to get involved with at least one nonprofit organization.

The reality is that it’s much harder to run a nonprofit than a for-profit business, especially a public business that’s already established. I am always happy to contribute my business experience to help nonprofits from a business point of view.

What role does (and should) the business sector play in philanthropy in our community? What is the case that you make when speaking with others in your field?
Any business that lives, works and plays in this community today – I would hope has a sense that if they are going to profit from being in the DMV, they ought to be doing some things to make things better for all of us. It’s enlightened self-interest – again we all get way more out of these involvements than we put in – you just don’t know when or how the pay off comes, but  it’s well worth it. It’s a win all the way around.

Why is VPP an important organization to have in Greater Washington?
Investing in VPP is a good return on time and a good return on investment. The capacity and the multiplier effect that VPP has for its nonprofit partners almost ensures that we are making a significant impact in the community –that’s the return.

As dollars available in philanthropy have been getting more and more scarce, VPP’s ability to point to real outcomes for real people in real communities makes a big difference in its success as a philanthropic organization.

VPP’s focus is on youth, but what impact do you think VPP has on the entire Greater Washington region?
The young people that VPP engages with through its nonprofit partners will be – 10 years from now – an integral part of the workforce in this region. It’s in everyone’s best interest to try to give those youth a better chance at being successful adults. That will translate into more business for restaurants, for builders, for everyone. If they have better life outcomes – in terms of their health, employment and education – it is to the benefit of the entire community. That’s a no-brainer.

Any time you can get to young people early and try to change their life outcomes, it’s a good use of time and resources for everyone.