Get to Know: Will Dunbar 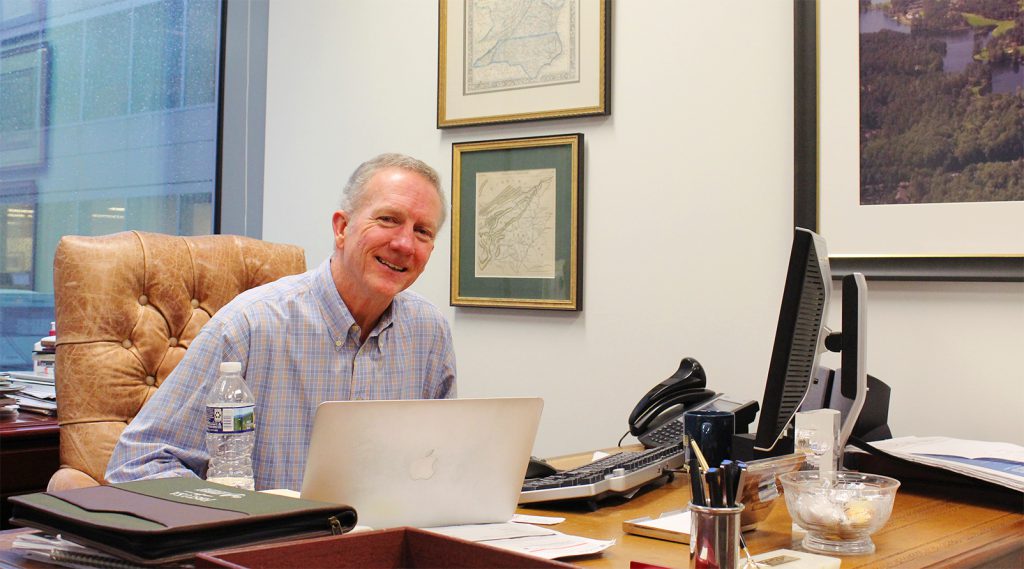 With years of venture capital experience under his belt, VPP Board Member Will Dunbar talks about the difference between profit-driven investments and VPP’s venture philanthropy model.

How did your upbringing shape you?
I grew up mostly in Richmond, Virginia in a classic, middle class suburban neighborhood and was the oldest of two kids.

My dad was an executive at a manufacturing firm called Reynolds Metals, which is now part of the big aluminum company, Alcoa. My father was raised by a single mom, which was unusual in those days. His parents divorced when he was young. Nobody in his family had been to college. He started work very young and put himself through college, then put himself through graduate business school. And he worked for Reynolds for a long time.

I went to public schools through high school, then I went to Davidson College. I worked for three years at a bank that became Bank of America, then called North Carolina National Bank, then to business school and came here to D.C. right after finishing business school in 1986.

What sort of jobs did you have growing up?
I delivered papers when I was in middle school and worked in a Sears Auto Center, working on the parts counter in the auto service repair shop in high school and I continued similar blue collar work in my part-time and summer jobs during college.

What experiences from your early jobs influenced your skills and interests?
Definitely the work ethic because my dad started delivering papers when he was 10 or 11. I can’t recall how much of that was because of his pushing and how much was my desire to make spending money. And I guess I always worked with blue-collar people – in the auto parts business, I worked with auto mechanics. Later I worked in one of the manufacturing plants that Reynolds Metals had, so I was in a union for a summer. I was working in a blue-collar environment all the way through high school and most of college, which taught me an appreciation for that kind of work.

In the summer of 1980, my family moved to Ohio. At that time the country was in a recession, and the Midwest was in a depression so there were no summer jobs. After about a month of not having a summer job, just mowing my parents’ grass, the man who later became my father-in-law offered me a position doing credit collections. He was in charge of credit for a department-store chain that was based in Columbus. I was an intern in the collections department, calling people who were behind on their credit payments.

The experience dealing with blue collar people and with people living hand-to-mouth who couldn’t make their credit card payments gave me an understanding of commerce and loans, but also of the challenges and financial struggles that so many people in our country face.

How did you enter the world of venture capital?
I worked in the technology area of a bank for three years and after that I went to Harvard Business School. One of my best friends and classmates had an older brother who was in the venture capital business and became a friend of mine. After learning what he did every day, I got more and more interested in venture capital.

When I was coming out of school in ‘86, most of my class was either going into consulting or investment banking. Venture capital combined the best aspects of those two things: It had a bit of management consulting and a bit of investment banking but then added something neither had, which was that long-term commitment, a partnership with the company you were investing in. You would do analytical and strategic work like a consultant, work on a transaction or trade, investing in the securities of the company, but you were getting “married” to the company. In those days a typical investment might last more than five years. And one of the ways that the industry has changed is that now it’s sometimes more than 10 years that you’re invested in a company. For me, it was better than consulting or banking because it had those two things, but also a long-term relationship with the company.

How did you first become engaged with philanthropy?
As a family, we were very involved with community service. We didn’t have wealth but we did community service through my church and soup kitchens, so it was something I learned since I was a little kid.

One of the other influences on my career was a mentor I had here in Washington. I worked for 10 years at Allied Capital, and the founder of Allied was a guy named George Williams. When I first went to work for George, we talked about nonprofit boards. I knew he was on the board of Greater Washington Boys and Girls Club. I was talking to him about nonprofits and nonprofit boards, and he said, “You should get involved with Boys & Girls Club.” He introduced me to the Executive Director of the Greater Washington Boys & Girls Club, and that person connected me with the Alexandria Branch of Boys and Girls Club. Denise and I got very involved in 1988 or 1989 – and have been ever since.

What led you to getting involved with VPP?
Through Mario Morino (co-founder of VPP). I knew of Mario because my first job in venture capital was with a firm in Tysons Corner, VA called Venture America and I met Mario through the firm partners. In those days Mario worked closely with two people I later met through the venture capital business, John Burton and Peter Barris, who became founding investors of VPP. In the 1980s, Mario was CEO of a public computer company then and a very successful entrepreneur here. Because I was one of the few venture capitalists in town, I was fortunate to meet him.

When Mario retired from running his company and formed VPP, I was vaguely aware he was working on the organization but I didn’t know anything about it until I went to an event for an organization I am part of, the Young Presidents Organization. Mario was making a pitch for VPP and looking for investors. The pitch resonated with me because it was about the blend of venture capital with philanthropy. The whole concept, I thought, was brilliant and grabbed me from the get-go, so Denise and I made a large investment in VPP and have been involved ever since.

How do the issues VPP works on connect with your values and interests?
I was interested in helping people less fortunate. What was compelling to me about VPP was the venture capital model itself. It’s not just providing money to companies that need capital to grow, but  also providing hands-on advice, strategic help, introductions to people who can be helpful – whether customers or go-to-market partners or executives who might want to join the management team. The kind of work we do with companies we invest in is much more than just providing capital. The insight Mario had that grabbed me is that that’s what nonprofits need.

It’s all about the management. That applies to for-profit companies and to community service organizations. It’s about the leadership, the CEO of a company or executive director of a nonprofit. It’s about the team, the people they’re able to recruit, the board they get to advise them and guide them. So that leadership would be the biggest thread and is important to investors in both kinds of organizations.

Another similarity between the kind of work we do in the venture capital world and at VPP is that we’re very focused on “why us?”

When someone comes to us requesting money, as several companies do every day, we’re thinking through whether this is a good place for us to invest money; we’re thinking through what is unique that we can provide; and how can we help them in non-monetary ways that no other VC firm can. Why did they come to us and why does it make more sense for us to make this investment versus anybody else? It might be industry contacts, expertise, a set of skills helping that kind of company in that industry at that stage of development. Why Core Capital versus other companies?

VPP is the same way. It’s just as important to match the need to our capabilities. How can VPP add value in ways that no one else can? It should be a key criterion.

But the end goal is much more quantifiable in the investing world by definition. We’re managing other people’s money. They want to see a high return on investment. There are a lot of qualitative things that factor into the quantitative results but the results are all quantitative.

On the philanthropic side, there are quantifiable outcomes, but there are a lot of qualitative aspects.

The other big difference between analyzing a venture capital investment and analyzing a partnership on the part of VPP is the exit. When we’re making an investment in a company, we go in thinking about how we’re going to get out of the investment. Specifically, we’re expecting the company to go public or be sold. What is the market for this kind of company going to look like at the time we’re planning to sell it? That’s a big factor in our investing decision process, but that’s not really part of the philanthropy world. We’re trying to build capacity and add value and help the nonprofit do a better job at what they’re doing. But there’s a lot less about how we’re going to launch them or sell them. It’s not part of the equation in the same way.

Are there any experiences you’ve had through VPP that have really stuck with you?
Every site visit I’ve done to see our investments has been extremely meaningful. The most recent would be seeing Ready for Work at Suitland High School, when we did the in-person site visit with students, administrators and VPP In-School Director Sterlind Burke.

It always helps to see the results and meet people who benefitted from the work. It gave me an appreciation of VPP’s role there, bringing multiple direct service organizations together to accomplish a common goal.

VPP’s role of knitting together different organizations that are hopefully sticking to what they do well and creating something larger than the sum of the parts is important and hard to do. I think that’s what VPP has become really good at.