Current Data and Recent Trends in the Well-being of Children and Youth in the Greater Washington Region.

Beyond the classroom: Greater Washington can do more to help young people flourish

Data on child well-being beyond measures of education are sparse for the Greater Washington region.

The well-being of children and youth is multi-dimensional. While strong educational preparation is a necessary ingredient for success, young people also need good physical health, social and emotional well-being, safety, and stability in order to thrive.

Across the region, available data identify several areas of progress and highlight groups of children and youth at risk of poor outcomes. For some issues, such as improving healthy birth outcomes, aggregate data may obscure substantial inequities across racial and ethnic groups. At the same time, data on some key indicators are missing, preventing us from providing a full portrait of child and youth well-being region-wide (see box at the end of the section).

Region-wide, more children have health insurance than in 2009.

Health insurance coverage is associated with children getting more timely care and with enhanced well-being in other dimensions of their development.45 Rising rates of insurance in the region are consistent with national trends following implementation of the Affordable Care Act.46

Figure 12. Percentage of children under age 19 without health insurance, by jurisdiction, 2009 and 2017 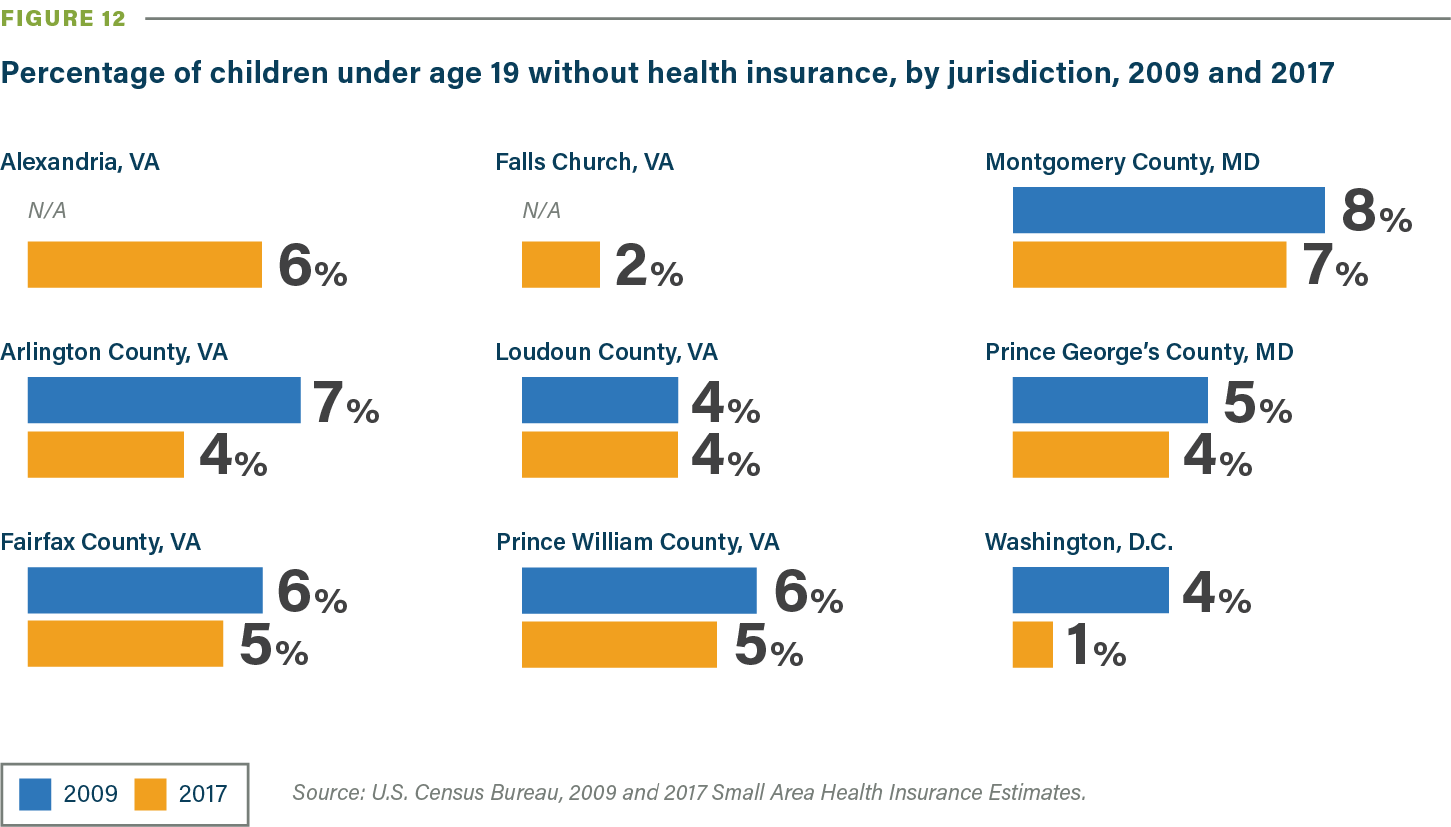 Overall, rates of low birthweight and infant mortality are down, but disparities by race and ethnicity persist.

Growth and development are rapid in the early years of a child’s life, and development builds on itself, underscoring the critical importance of a healthy start to life. Key indicators of a poor start include low birthweight and infant mortality status. On both measures, while the region shows encouraging progress, there are race-based disparities in birth outcomes. In particular, research shows that health care delivered to Black mothers and their infants is likely to be of poorer quality than the care provided to White mothers and infants.47

Similar patterns are found for infant mortality across the Greater Washington region.

Smaller percentages of parents report reading to their young children and sharing family meals together than in past years.

Children thrive on the time they spend interacting with the people closest to them. Two traditional indicators of family time together that benefit children’s development—reading to young children and sharing meals as a family—suggest that some families may struggle to spend time together. This may reflect parents’ long or nontraditional work hours, lengthy commutes, or lack of awareness that these activities are important to their children’s development. A child’s experience of being read to promotes not only early literacy, but also positive social and emotional development.51

Trends in parents reading to their children region-wide include: 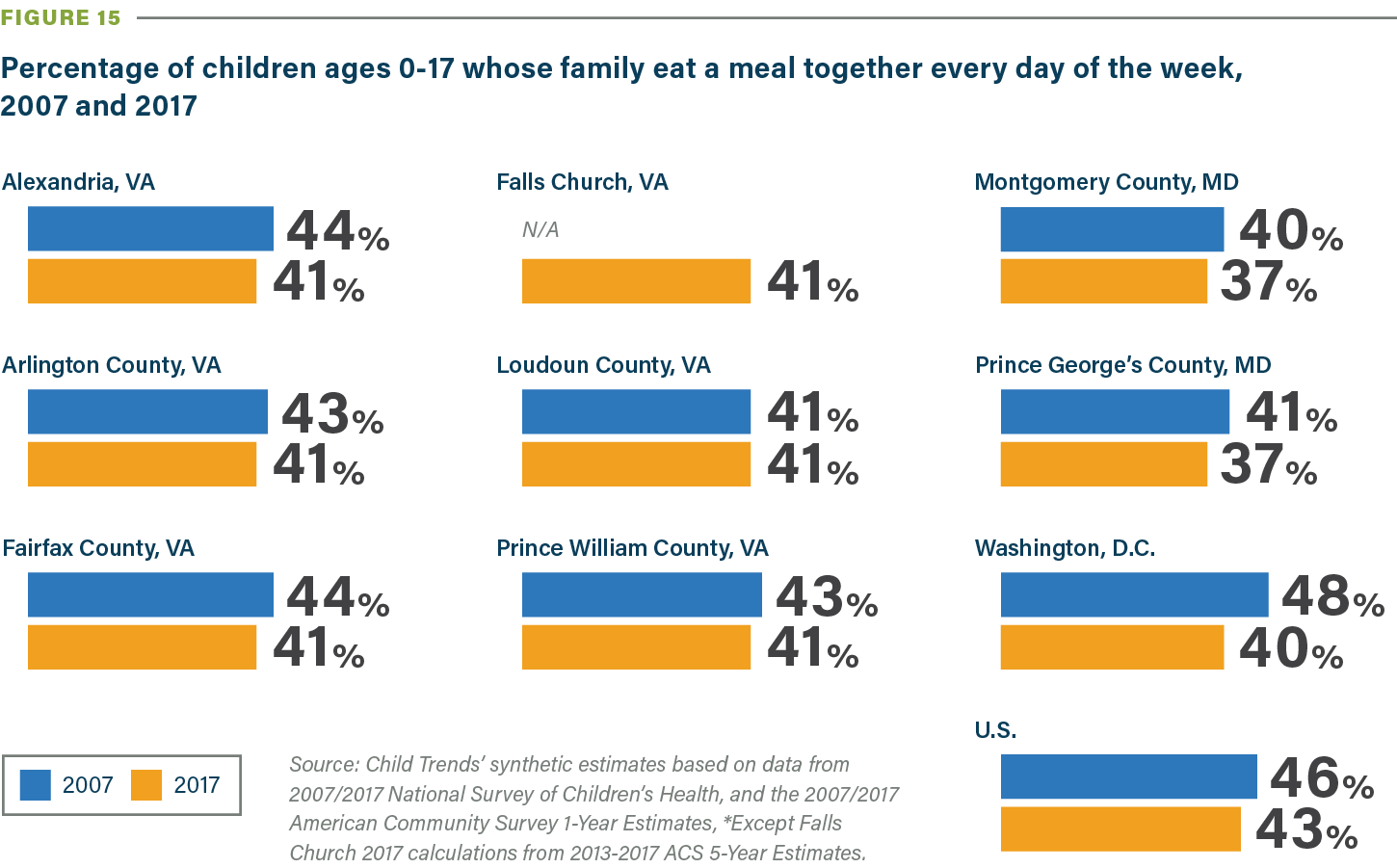 Limited data on adolescents’ health-related behaviors suggest declines in substance use, but also in physical activity.

Much of the data on adolescents’ health-related behaviors are limited to two jurisdictions in the region: Washington, D.C. and Fairfax County. These are the only two local jurisdictions included in the federal Youth Risk Behavior Survey (YRBS). We report the data for these two locales but strongly recommend against drawing region-wide conclusions.

More youth use alcohol than any other age-restricted or illegal substance. In addition to the health damage caused by alcohol itself, other types of risky behavior, such as drug use and unprotected sex, are associated with teens’ heavy drinking. Among U.S. teens, binge drinking, or consuming multiple drinks in rapid succession (“drinking to get drunk”), is a common type of alcohol use.54

Youth tobacco use has undergone substantial changes in recent years with an increased use in e-cigarettes (vaping) as compared to conventional cigarettes.55 Unfortunately, many young people took up the habit before recently discovered links between the use of e-cigarettes and severe, acute health problems became known.56, 57 Nevertheless, most smokers still begin using tobacco in their teens, and many become addicted to nicotine, which is a potent toxin available in many forms. Although some vaping products are nicotine-free, the data available on their use unfortunately do not distinguish between those that contain nicotine and those that do not. Many such products combine nicotine with flavorings that may cause some young users to believe the products are less harmful than they actually are.58

Figure 16. Percentage of high school students who reported they used an electronic vapor product on at least 1 day in the past 30 days, 2015 and 2017

Neuroscience research has found that significant brain development is ongoing in adolescence and young adulthood, raising concerns about marijuana use by youth. Evidence indicates that marijuana use may impair cognitive functioning, as well as emotional self-regulation, contributing to risky behaviors.59

Participation in out-of-school-time activities and community service or volunteer projects is high across the region.

Many of today’s young people recognize the value of engaging in activities that strengthen their social, emotional, and physical skills, and that contribute to their communities. Fairly consistently across the region, about eight in 10 youth participate in one or more out-of-school activities, and nearly two thirds are involved regularly in community service. 60

Out-of-school-time (OST) programming can be offered before school, after school, and during the summer for school-age children and teens. Such programs provide important opportunities for young people to learn and play in a safe and supervised environment. Well-designed and managed OST programs can also promote important health benefits and social and personal skills,61 and can even improve academic achievement.62, 63

Table 3. Children ages 6-17 who participated in one or more organized activities outside of school in the past year, 2007 and 2017

Youth who participate in voluntary service are more likely to develop leadership skills, effective decision making skills, and a sense of belonging and purpose.64, 65 All school districts in the region require a community service component as a graduation requirement.66, 67, 68 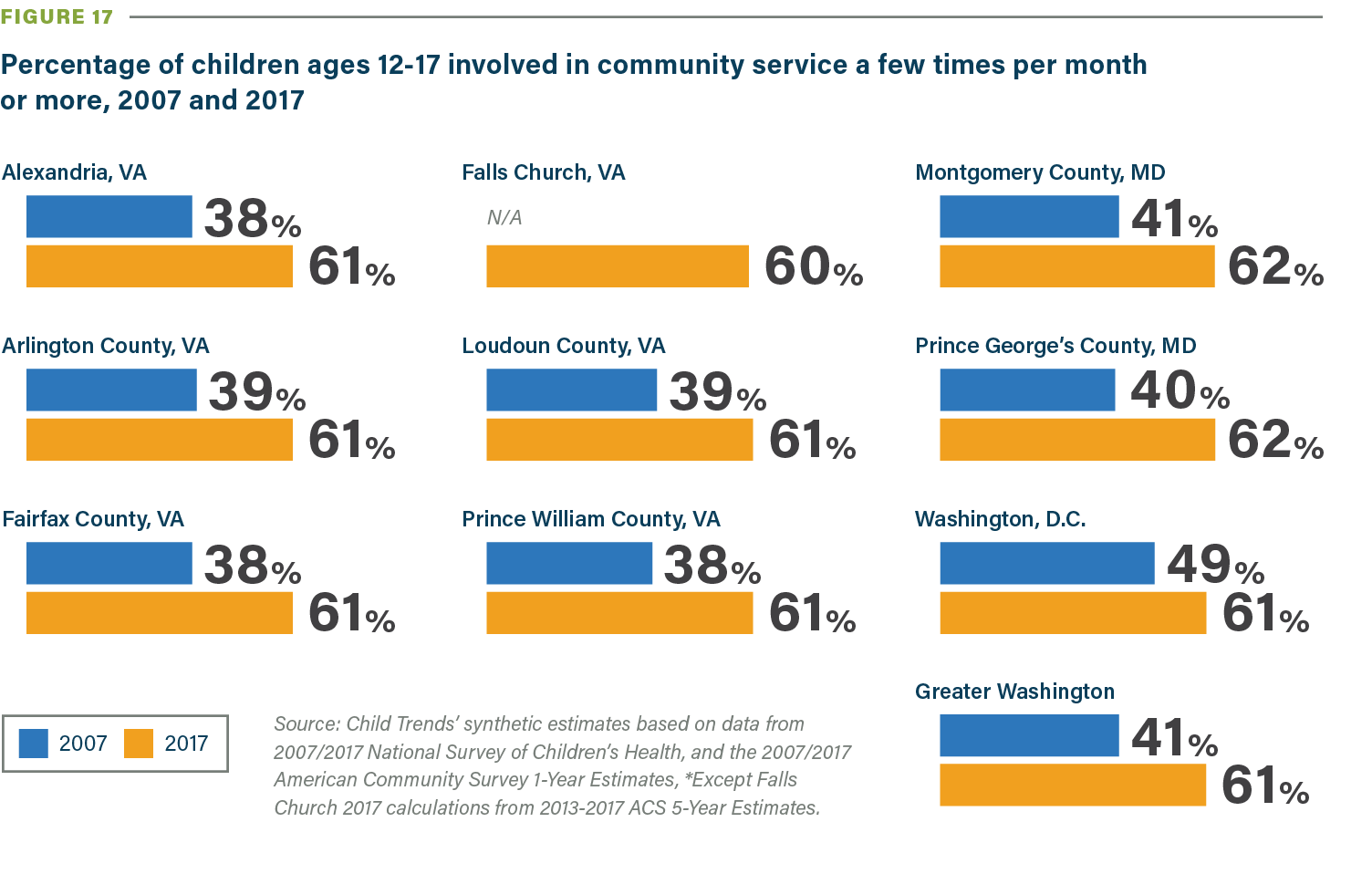 The Greater Washington region is a unique geographic area—an aggregation of counties and cities that are linked economically and culturally, yet governed independently.

Comparable data for all jurisdictions, as well as data on a wider range of indicators, would facilitate region-wide planning and action to promote the well-being of all young people in the Greater Washington region.

Regrettably, such robust, region-wide data are lacking for Greater Washington’s children and youth, particularly for nonacademic indicators. For several important topic areas, including infant development, behavioral health, and postsecondary education, we were unable to locate data that met conventional standards for consistency of measurement across jurisdictions, disaggregation by important subgroups, or timely reporting.

An additional challenge is identifying an appropriate context for comparing the region’s data with those of other metro areas. In some cases, we use national data for this purpose, but we hesitate to hold up any other metro region as a likely peer. The cultural and historical characteristics of the Greater Washington region are sufficiently distinctive to raise cautions about making such comparisons.

Young people will lead our society into the future, regardless of what adults do to either support or hinder them. That future will be brighter if our communities rise to the challenges of nurturing, guiding, equipping, and engaging all young people to succeed.

The Greater Washington region rebounded from the Great Recession and moved into a period of growth and prosperity, but the region’s children have not benefited equally. Research suggests that the recession had more negative and lasting effects on those who have experienced intergenerational poverty and discriminatory policies, the consequences of which reverberate throughout society. Both nationally and in many schools and districts within the Greater Washington area, de facto residential and school segregation, both by income and race, continue to be a reality. As a result, Black, Hispanic, American Indian, and low-income students of all races are more likely to attend lower-resourced and lower-performing schools. Similarly, unequal access to preventative and comprehensive health care contribute to differential outcomes in infant mortality rates.

Much work remains to improve prospects for all of the region’s children and youth. The path to progress will not be short or easy. However, history suggests that progress is possible and that gaps in achievement, income, health, and other areas can be narrowed or eliminated. Leaders across the region may want to examine, for example, how current policies and practices related to housing, transportation, schools, and businesses perpetuate historical inequities. We strongly encourage regional and local leaders to explore ways to ensure that children from all backgrounds—especially low-income students; immigrants; and Black, Hispanic, Asian, and American Indian children—are equally prepared to succeed. To the extent that Greater Washington’s current and future leaders bridge these gaps and broaden participation in a prosperous, inclusive community, they will have proven lessons to share with other metro areas that seek to enhance the quality of life for their own young people.