Current Data and Recent Trends in the Well-being of Children and Youth in the Greater Washington Region.

Greater Washington is leaving many children behind.

While high-quality education is lauded as an equalizer that leads to increased economic prosperity in adulthood, many schools and school districts struggle to provide children with this foundation for success.11 Many of the Greater Washington region’s students are not gaining the competencies schools intend to foster. The data show that many young people have a tenuous or nonexistent connection with school. From early childhood through early adulthood, educational outcomes vary across jurisdictions, resulting in a mixed report card for the region on how well the education system is preparing young people for the future. Poverty and discrimination—often longstanding—also contribute to disparate outcomes by family income and race/ethnicity.

Brain science and developmental studies confirm that education begins long before children start formal schooling. During the first years of life, one million neural connections per second form in the young brain.12 Investments that communities and families make in these early years of life can have long-term positive effects on a young person’s development. The Greater Washington area has taken important strides to increase access to early care and learning; however, there is insufficient data on the quality of these environments and learning experiences. The available data suggest that a sizable proportion of young children are not ready for school.

Most students in the region complete high school, which is a fundamental milestone but no longer a sufficient requirement for most employment opportunities. The high school credential has become less valuable over time as the nation’s economy has changed.13 Adults who have a postsecondary degree earn substantially more over the course of their lifetime compared to those with a high school diploma.14

The current generation of children and youth ages 0 to 24 is the most racially and ethnically diverse in recent history—both nationally and in the Greater Washington area. Ensuring greater access to and success in postsecondary education for Black and Hispanic students—and for academically struggling students—will be necessary if Greater Washington’s children and youth, regardless of their background, are to benefit from the region’s prosperity and growth.

Public pre-K enrollment is up by more than 10,000 children region-wide, driven largely by increased numbers in the District of Columbia and four other jurisdictions.

Public pre-kindergarten (pre-K) can promote children’s learning and, when offered for a full day, can also support parental employment.15 Within Greater Washington, as well as across the country, more school districts are attempting to expand publicly funded pre-K programs to serve all children residing in the area.16 In the District of Columbia, much progress has already been made toward the goal of universal access to pre-K. In Virginia and Maryland, eligibility for such programs is still restricted to families who are economically disadvantaged.17, 18

In addition to pre-K, many young children are in nonparental child care. High-quality child care can provide many of the benefits of pre-K and, in many cases, may be better suited to parents’ employment schedules. Participation in these programs varies based on factors such as the cost of care relative to one’s family income, other indicators of access (such as the convenience and quality of providers), and preferences to use parental care for young children.19 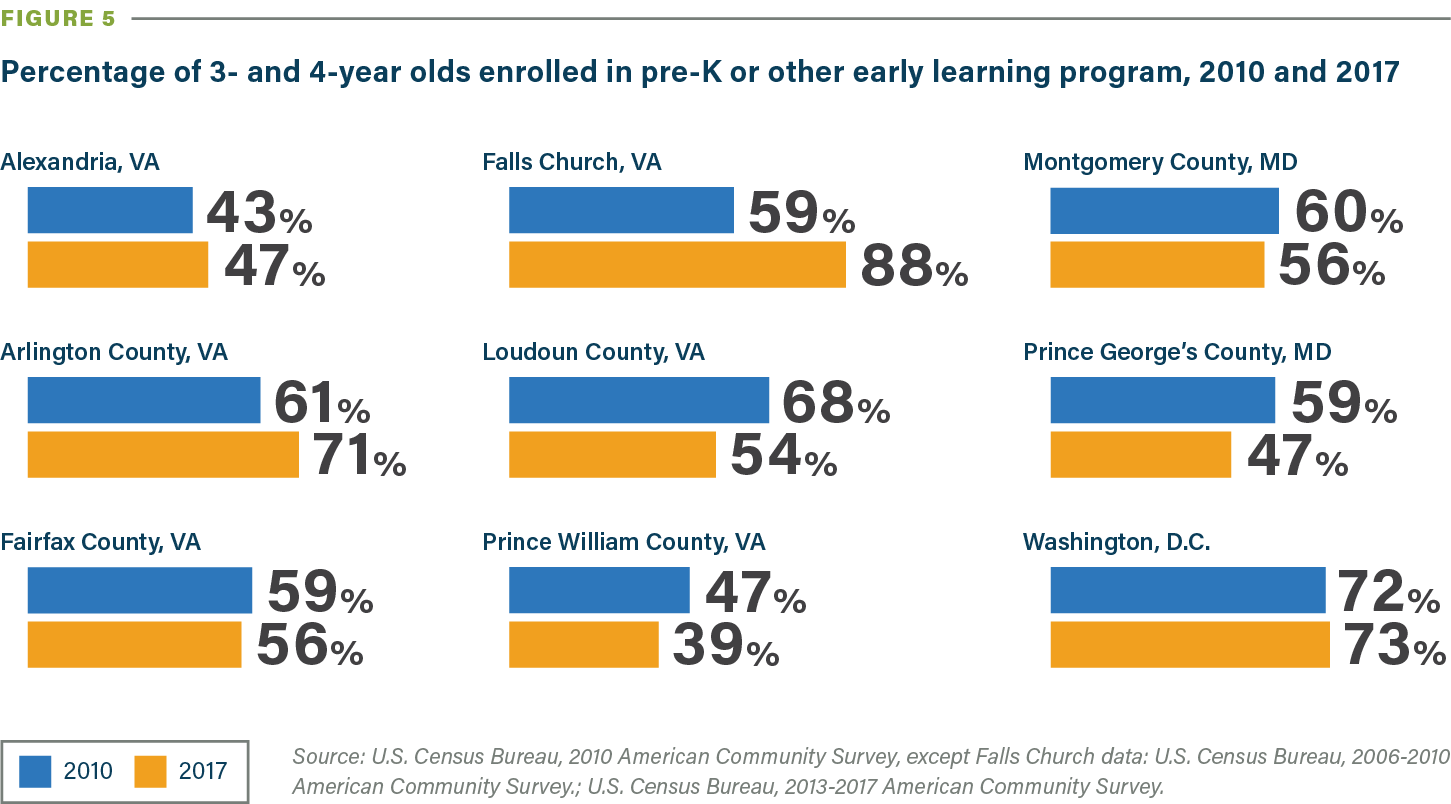 Across the Greater Washington region, too few children are adequately prepared for kindergarten.

To take full advantage of the opportunities offered in school, children need basic social and emotional skills, cognitive and language skills, motor and other physical skills, and a foundation of good health, including adequate sleep and nutrition.21

Readiness is a two-way street: Schools must be ready to meet the diverse needs and experiences of children and their families.22 Young children who are not adequately prepared for school can fall further behind their peers, jeopardizing their longer-term academic success, unless their needs are identified and they are given extra support.23

While no nationally adopted measure of kindergarten readiness exists, many states and communities have implemented their own assessments. These vary in their comprehensiveness, format, and alignment with developmental principles, and their results are used for a variety of purposes.24, 25, 26, 27 Data show that anywhere from 20 to 60 percent of young children are not ready for kindergarten.

Due to the diversity of measures used, kindergarten readiness data cannot be compared across jurisdictions, but the following jurisdictional results are notable:

Reflecting the child population, schools in the region are becoming more racially, ethnically, and linguistically diverse.

Across the region, public school enrollment has increased, with Hispanic students accounting for much of the growth. The proportion of students who are English language learners (ELLs)28 is also increasing region-wide.

Chronic absenteeism is lower than the national average in several jurisdictions of the Greater Washington area, but it remains a serious problem in a few others, especially among high school students.

Chronic absenteeism describes students who miss 10 percent (around 18 days) or more of the school year. Students who do not consistently attend school are not able to reap the benefits of education, social relationships and, in some cases, food provided on-site. Poor school attendance is an early warning indicator that a student may not perform well and may not graduate from high school.29 The reasons for chronic absenteeism are varied and result from individual, family, and community-wide challenges at home or in school, such as fears about safety. Schools are increasingly recognizing the need to develop multifaceted strategies to address chronic absenteeism in their buildings. These include efforts to improve school climate and address factors that young people might be experiencing, such as homelessness, that can make it more difficult for them to attend school regularly.30

Figure 7. Percentage of students who are chronically absent, SY 2017-18 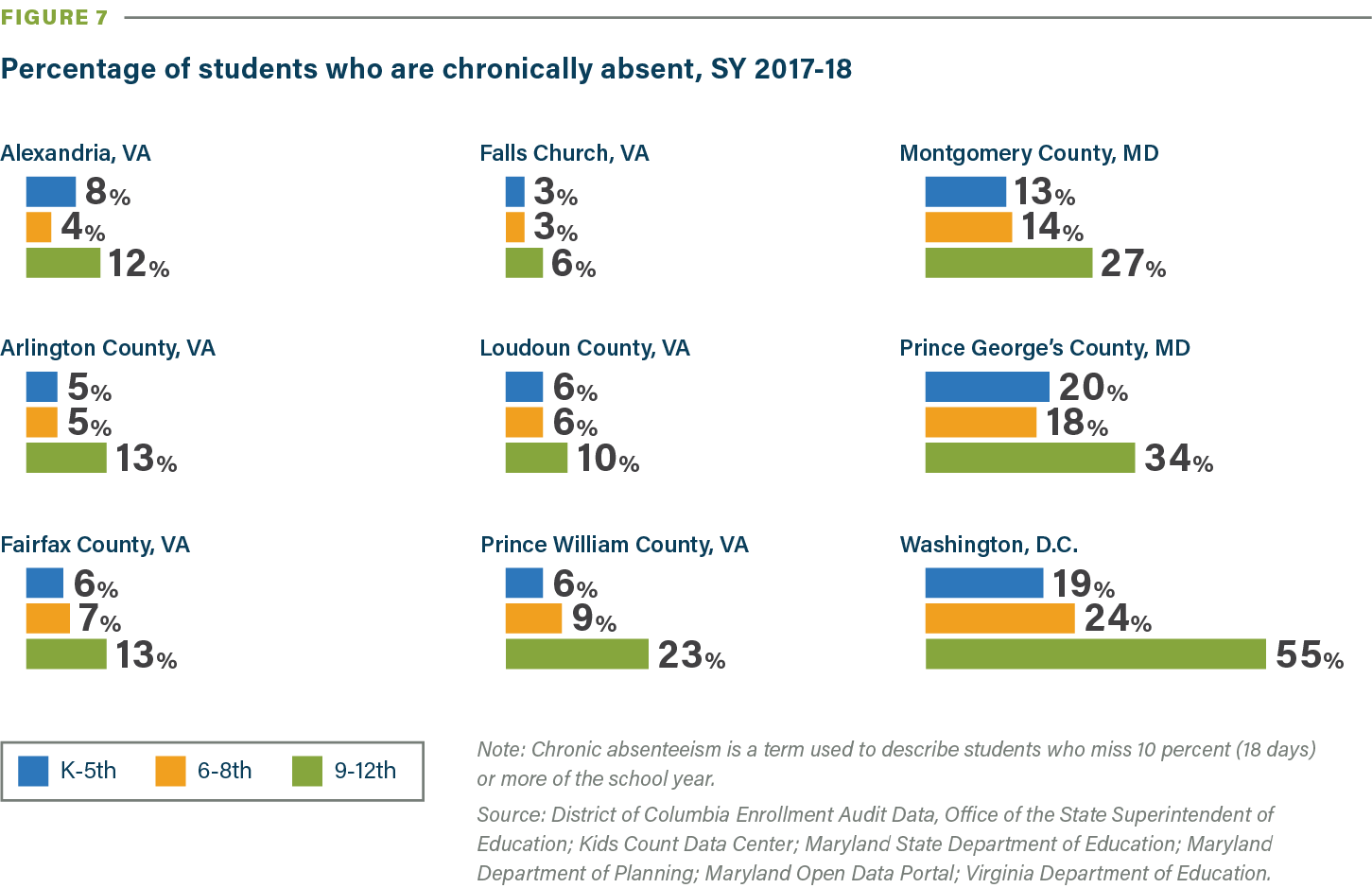 Despite increasing school enrollment across the region, a sizable percentage and number of school-age children in the Greater Washington area are not enrolled in school. Current data are not robust enough to explain their absence.

For a small proportion of the area’s school-age children and youth, school enrollment cannot be determined, raising concerns that institutional or personal barriers, faulty data, or some combination of these factors may be to blame. 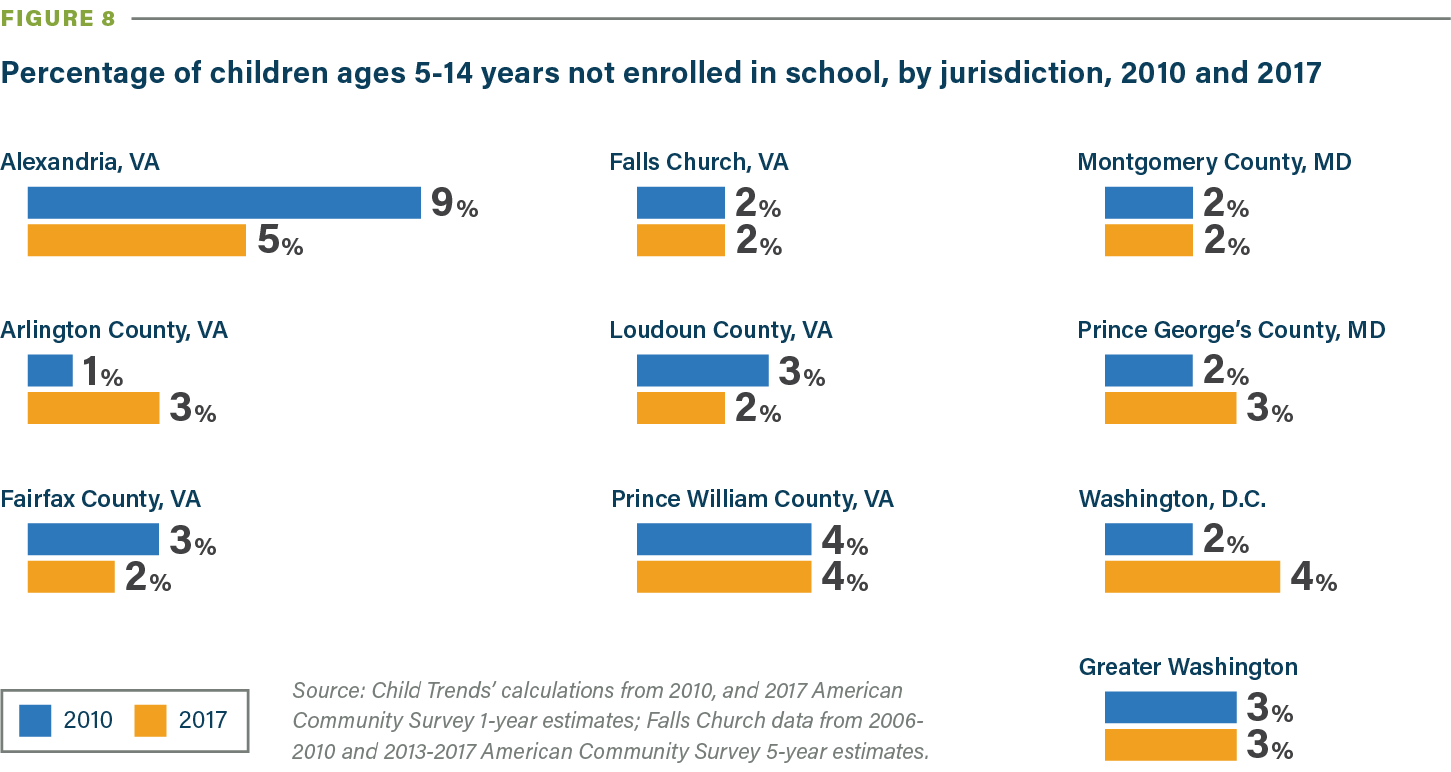 For several decades, consistent with federal guidance, states have used a handful of standardized assessments that define which students are proficient in a given subject area. Each state determines the content covered in their assessments, and how score cut-offs define “proficiency.”32, 33, 34, 35 Virginia used its homegrown Standards of Learning (SOL) assessment, while the District of Columbia and Maryland[xxvi] used the test developed by the Partnership for Assessment of Readiness for College and Careers (PARCC).

In Virginia, after the standardized assessments for reading and math were changed in the 2011-2012 school year and became more challenging, the percentage of students who met proficiency on assessments across all racial and ethnic groups dropped substantially. However, proficiency levels dropped more rapidly and rebounded more slowly for Black and Hispanic students. 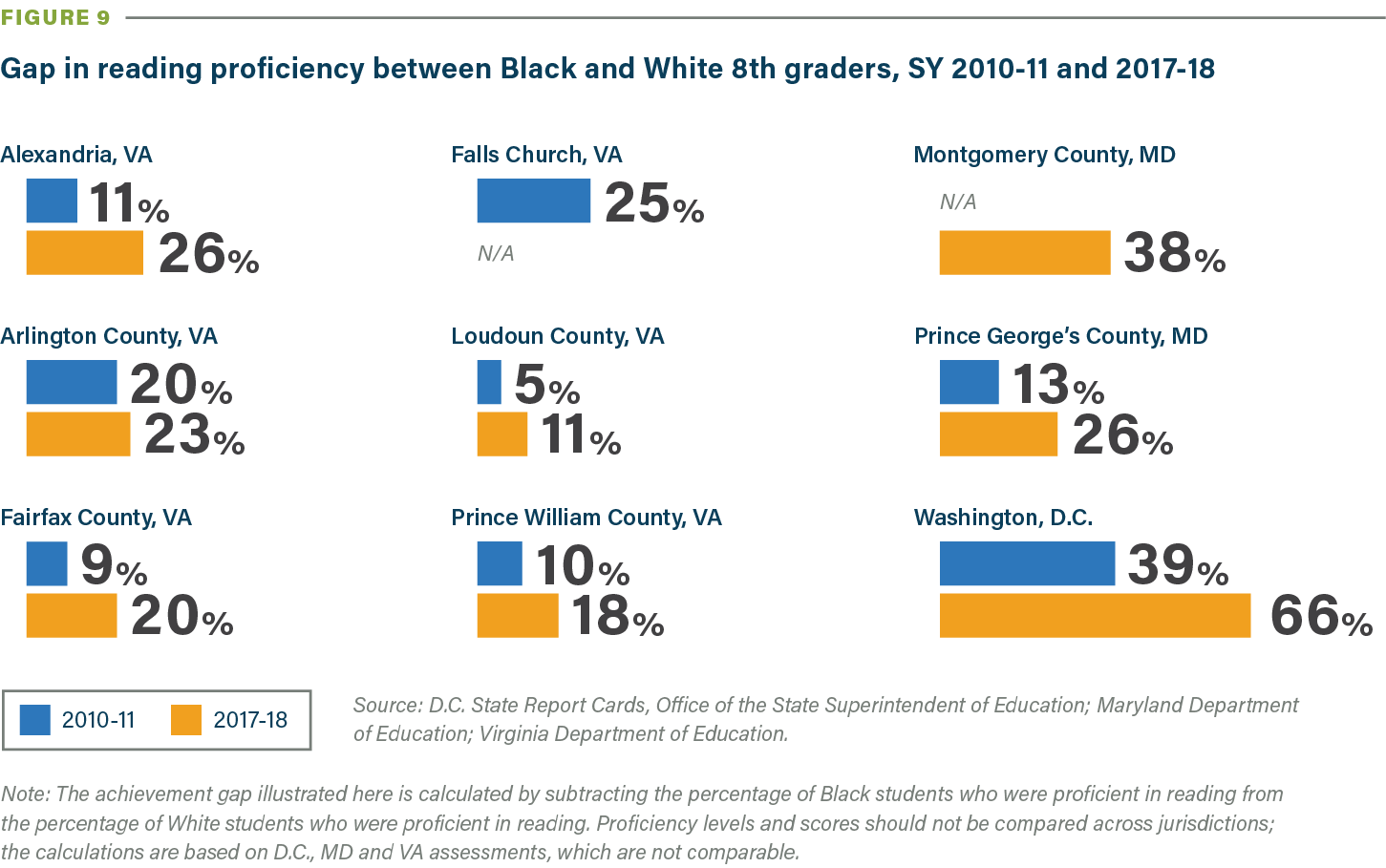 After the introduction of the PARCC in Maryland and the District of Columbia in 2015, test score differences across racial and ethnic groups in Montgomery and Prince George’s counties and in the District were much larger than those found in the Virginia jurisdictions.

This comparison of average proficiency levels masks the fact that some of the racial and ethnic achievement gaps might be explained by differences in income, school quality, and other factors. Both nationally and within the Greater Washington area, gaps in test scores by racial and ethnic groups are rooted in structural and historical racism and inequality, particularly in the areas of schooling and housing.

Ninth graders who successfully progress to the next grade on time are more likely to graduate from high school.37, 38

On-time graduation is measured by the percentage of students who complete high school within four years.39 Among students who do not graduate on time, some may re-enroll in another grade; some may participate in other education options, such as earning a GED, earning community college credits, or pursuing an industry recognized certification; and others may simply drop out.

Data used to measure college enrollment in the Greater Washington region include the number of students who graduated from high school in 2016 and enrolled in a postsecondary education institution within 16 months of graduation.

Relatively few young people in the Greater Washington region are not in school and not working.

Some young people—commonly referred to as “opportunity youth”—are neither in school nor employed, leaving them disconnected from the paths likely to lead to economic self-sufficiency. Reasons for young people’s disconnection from the labor market and schooling may include lack of access to opportunities and resources that would enable them to be engaged in school or work. Other reasons include involvement in the criminal justice system, family responsibilities (including parenthood and pregnancy), or chronic disabilities. Communities that do not address barriers that young people might face in their efforts to gain employment or continue their schooling will not benefit from the contributions that these young people have the potential to offer.44

Today, many youth and young adults follow paths other than enrolling in full- or part-time postsecondary education immediately after high school. Instead, they may obtain full- or part-time work (including training, internships, apprenticeships, or military service), or experience brief unemployment before reaching a level of financial stability. 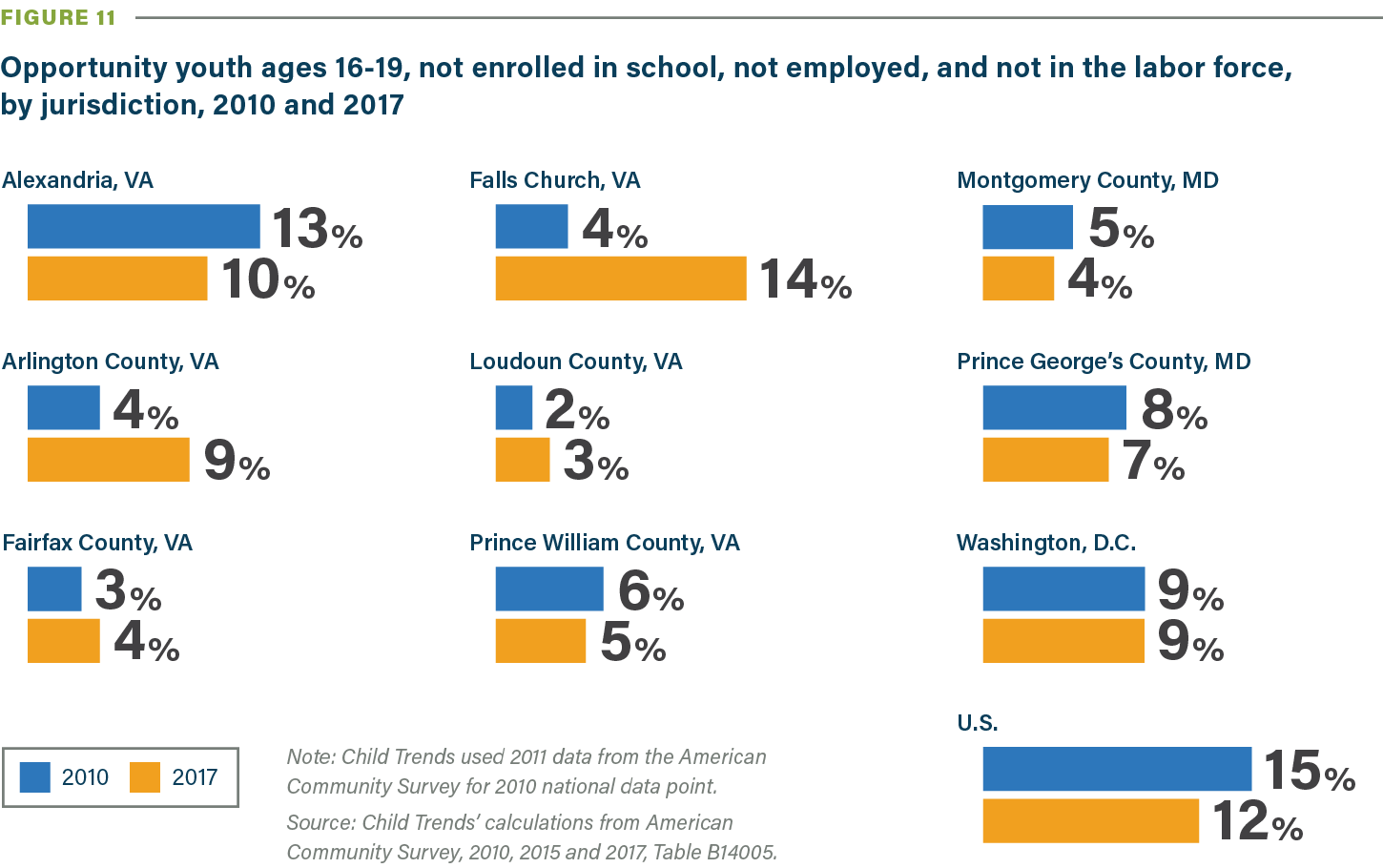 While the percentage of opportunity youth across the region is relatively low and did not change significantly from 2010 to 2017, individual jurisdictions have seen their percentages change markedly.