What started as a simple pizza delivery business in the mid-1990s has become one of the nation’s most successful educational systems for youth in the juvenile justice system. Early on, VPP caught the vision for Maya Angelou Public Charter School and helped its founders build a strategic roadmap that more than doubled the school’s size and charted a path for growth.

David Domenici sat down with Carol Thompson Cole to tell their story.

David Domenici – Co-Founder, See Forever Foundation: The idea was initially just a pizza delivery restaurant for kids coming out of the court system. We helped them learn basic operational business skills. Eventually, we started the school as an outgrowth of the belief that kids involved in the juvenile justice system deserved and needed really high-quality education and job training programs to help them find ways to be successful in high school and beyond.

Carol Thompson Cole – President and CEO, VPP: We were really taken by the commitment and the passion that David, James, and others had in addressing the issues faced by these young people. In many ways they were an entrepreneurial startup, but they wanted to build a high-performing organization. We thought VPP’s business-planning process and strategic assistance could help them grow in the ways they wanted.

David: I see VPP’s help in three main avenues. First they were just incredible in the way they helped us build our board, increase our fundraising efforts, and reach the broader community. Second, they allowed us to focus on internal capacity building. VPP funding helped us to create the framework for meeting needs across multiple campuses, which is what we still have today. And finally, VPP helped us expand our network to reach people and organizations that helped us raise money, save money, gain expertise, and ultimately serve our kids better.

Carol: Early on, we spent a lot of time helping them to develop their two boards: the board for the school, as well as the foundation. We focused on helping them build a strong senior management team and a development team, as well as their curriculum and programs. The goal was stability and moving towards sustainability. There were just 85 students when the investment started and, by the end, they had almost 300 kids.

David: In 2007, we responded to an opportunity to run the city’s long-term youth correctional facility, at the time called Oak Hill. We were awarded the contract and today it has become our academy called New Beginnings. I just don’t see how we would have been in a position to make that move if it hadn’t been for VPP. And today, New Beginnings is one of the best—if not the best—schools at a youth correctional facility in the country.

Carol: One of the proudest days for me was when they applied to take over the education program at New Beginnings and won. And now David is going around the country taking the lessons he’s learned and trying to improve these types of programs in other places.

David: The strategic planning process was very effective for us and we wound up with a good plan, which helped us bring a lot of the right people together to make it all happen. In some ways, it was amazing to look back five or six years later and realize how many of the pieces of the strategic plan we had actually hit.

Carol: When you look at where we started in the investment, where we were when it ended, and where they are today, it’s just amazing. They went from being a small startup charter school to being a high-impact organization on multiple campuses. Now these schools are widely recognized as models of education for changing the life trajectory of court-involved, incarcerated youth. It’s a tremendous testimony to David and his team.

At Maya Angelou, students develop the academic, social, and employment skills they need to build rewarding lives and promote positive change. The high school provides a comprehensive education in a non-traditional setting to all students, including those who have not been successful in their educational experiences. Many have been involved in the juvenile justice system. 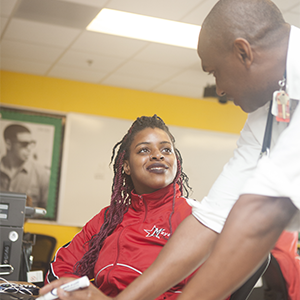 The goal of this partnership was to help See Forever:

See Forever is a considerably stronger organization than it was in 2002, having transformed itself from an organization running a small charter school to a high-impact institution managing a multi-campus system. Its effectiveness and sustainability have increased substantially as well with the rebuilding of its two boards of directors and implementation of a system to measure results.

Planning and Focus: Completed business planning in January 2003, facilitated by McKinsey & Co., resulting in a well-defined expansion plan for opening new campuses, improving performance, and building their operations to support a multi-site school.

Outcome Assessment: With the support of the EMCF, created detailed performance assessment system.