When a student at Anacostia Senior High School said to the founder, “I need a real job,” he took on the challenge by partnering with five other business leaders to provide internships. In 1996, Urban Alliance was founded. Since then, the organization has worked with over 500 businesses to place over 3,000 high school seniors in professional internships, and they have trained more than 15,000 youth in workforce skills. In 2012, VPP initiated a partnership at an optimal moment for Urban Alliance’s growth to help move the organization’s strategic plan to action and expand into Northern Virginia.

Eshauna Smith – CEO, Urban Alliance: For us, the job is really the hook that brings the young people to us, and what we’re able to do is wrap around that job a number of very important supports, including everything from financial literacy, to college admission assistance, to life skills, to providing them with two caring adults during their senior year. All of those things combine to create this powerful intervention that really helps youth understand how to make a successful transition from high school into adulthood.

Carol Thompson Cole – President and CEO, VPP:  Our first encounter with the organization was when they applied for our Social Innovation Fund award. As we went into our first year of the investment, they met milestones very quickly. We recognized that Urban Alliance had a strong team in the planning process and realized that we had an organization that could deliver on outcomes for youth.

Eshauna: Thought partnership is critical to quality leadership and the ability to be high-performing. When I came into the investment, it had already begun. As the new leader of Urban Alliance, I was excited about the opportunity to work closely with like-minded folks who want to have the kinds of conversations around delivering quality services, evaluating your impact correctly and fully, meeting young people where they are, the politics of it all, the burden of fundraising, the difficulty of leadership, the difficulty of being a leader of color and the difficulty of being a female leader. That is the part of VPP’s investment that you might not find in a proposal about collaboration or partnership.

Carol:  When we looked at the growth of Urban Alliance, we also knew we had to build the internal capacity of the headquarters. So we invested in several new positions, and one was the president. That opportunity came through our investment. Eshauna had a year in the position to develop a relationship with the team and to understand the workings of the organization. We didn’t know what we were laying the groundwork for, but that was an important part of the successful transition of leadership.

Grace Katabaruki, Director of Investment Practice, VPP: Creating the president’s position also came from the insight that we gathered during the strategic planning process. We had to make that transition while making sure the programs continued to deliver on the outcomes. Being thoughtful with Urban Alliance’s leadership about what kind of capacity they would need to do those things simultaneously and excellently was a part of our contribution.

Eshauna: VPP played a hugely critical role in that because very rarely do you have a funder who wants to help build your staff capacity at the national level. It was great to be able to spend a year working through those kinds of things that are often hard for nonprofits to get a full-time employee to be able to spend time doing.

Carol:  When we started the investment, Urban Alliance was already in Baltimore and were expanding into Chicago. We spent a lot of time in our due diligence trying to figure out whether they had capacity to take the next step into Northern Virginia. We had to do this while protecting the investment regionally. We started to see that the team was strong and ready to scale, so we started the dialog about helping them grow.

Eshauna: We accomplished a lot during this investment, but I would say the most phenomenal accomplishment has to be our expansion into Northern Virginia.  We’ve come a long way. To see that we’re fully-functional in the region, there is a five-member team and we’ve met the goal we set to have at least 70 jobs there is amazing. Virginia opened us up to a new population of young people who are immigrants. We’ve pushed ourselves and enhanced our skills in working with these youth, which is another accomplishment. It’s a challenge that we are still trying to figure out, but we are very proud and happy to work on it.

Carol:  Many nonprofits want to stay true to what they started out to be. We challenge our investment partners to make adjustments as they grow. Sometimes it happens, and other times it doesn’t. But the Urban Alliance team made adaptations while they moved forward. They were open to positive change, and we were there to help them along the way.

Grace: I remember conversations about how to preserve the culture as we do this rapid expansion. Looking at some other organizations that have experienced organizational change, the result isn’t always the same as the one Urban Alliance came to.  Another piece of success was preserving that strong youth-development-focused culture.

Eshauna: That’s right. And our model is truly gold because of its comprehensiveness, but we are going to always work to tighten it up. We want to make sure that we are delivering the highest-quality programs and staying relevant as the landscape continues to shift.

This investment upped the ante on our ambitious goals. It significantly increased the number of young people we serve as well as our capacity and sophistication as an organization. We knew that if we had VPP’s stamp of approval, then we could get in the door with the Department of Education’s i3 grant. And we did. After being selected to receive $10 million from the federal government, we are confident that other doors will be open as well.

Carol:  One of the other things that always impresses me about Urban Alliance and Eshauna’s leadership, is the culture around continuous improvement. You keep it going. You keep it moving, then you step back and assess what you’ve done. And I think that approach will sustain Urban Alliance over the long haul.

Eshauna: I believe the thing that attracted VPP to Urban Alliance initially was the strength of the entire team and the brilliance of the management team. So, VPP’s voice will always play in my mind as we grow asking, “How do you keep the team strong?”

Carol:  We had completed strategic planning with a strong team and leader. The aspirations were there. The implementation plan was there. We helped by funding additional senior positions. The rest is history, so to speak.

Eshauna: One word that comes to mind that summarizes our investment experience with VPP is excellence. Striving for excellence for our young people means that we’re always striving for excellence in our delivery, in our relationships and with one another as a staff and a team. We’ve been conditioned to strive for excellence as reflected in our core values and our mission. That is what this partnership has meant to us. 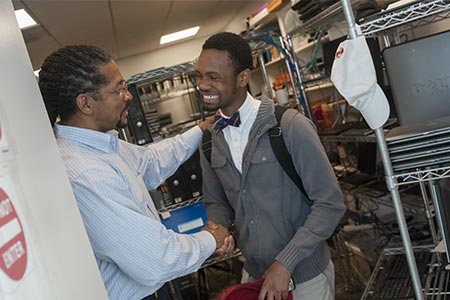 Based on research from the Urban Institute, Urban Alliance is the only program in the entire U.S. serving disconnected youth and at-risk high school students by combining year-round training, paid internships, mentoring and case management support. Urban Alliance’s goals are to:

This expansion will result in improved academic success, substantially higher college enrollment, and a dramatic increase in youth’s prospects for long-term employment.